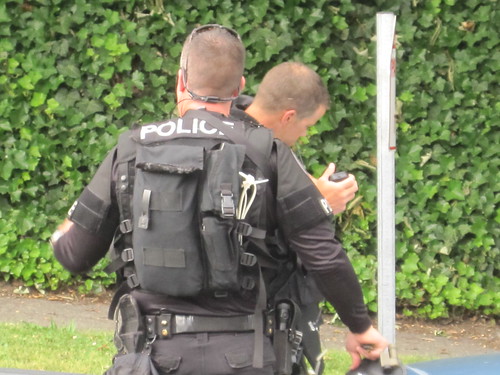 As you read about in our live updates, a Fremont man attacked his parents with a baseball bat Tuesday afternoon, leading to a stand-off with Seattle Police when he barricaded himself in the house. The stand-off, which began at roughly 3:00 pm ending around 5:30pm when the SWAT team surrounded and stormed the house in the alleyway between Evanston & Fremont Ave. at 41st St.

The 52-year-old suspect is known to police for previous incidents and is described as a schizophrenic. As someone who lives in the neighborhood (right around the corner, to be exact), I can confirm that four police cars were parked on 41st St at Fremont Ave, last week due to an incident involving the man.

The parent’s were able to escape without any major injury and were seen waiting outside of the taped-off area, awaiting the outcome of the arrest.

No word yet on charges but the arrest seems to go off without any issues or problems. At least 15 police cars, two fire trucks and a SWAT van were present at the scene.