Investigators identify cause of deadly fire 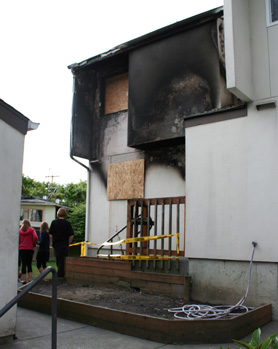 Seattle Fire Chief Gregory Dean says investigators have determined Saturday’s deadly fire in Fremont was caused by a foam mattress in a downstairs closet that was leaning against a light bulb. Dean says the fire was ruled accidental.

According to Dean, Helen Gebregiorgis was asleep on the couch downstairs when one of the children smelled smoke and woke her up.  The smoke alarm went off soon after that, and Helen opened the doors and windows to try and clear the smoke.

“The foam mattress fueled the fire, the oxygen from the open doors and windows fed the fire and made it grow quite fast,” Chief Dean said in a press conference this afternoon.

When Helen went upstairs to open the windows, she heard an explosion downstairs, grabbed her niece, and ran out of the house.

The five other members of the family, who did not make it out alive, were in a windowless bathroom on the second floor. When crews arrived on scene they could not put a ladder to the second floor because the fire was already too involved. Firefighters went into the apartment next door in hopes of breaking through the wall, but couldn’t due to flames.

Chief Dean says his department is still devastated by the outcome.  A safety investigation into the fire engine that malfunctioned is expected to be completed late next week.  Chief Dean also urged everyone to make sure they get out of their home immediately when a fire alarm goes off.

“Hopefully the lessons learned will not only make us a better department but a better community,” Dean said.