Updated 10 p.m. Five people have died, four of them children, in an apartment fire at 41st. NW and NW Leary St. this morning. “All of sudden I heard, ‘Fire!'” said one woman who was with the family in the apartment as they prepared to attend UW’s graduation this afternoon. “I went to go save the babies, but the thick smoke, it was just too thick, too much fire.” 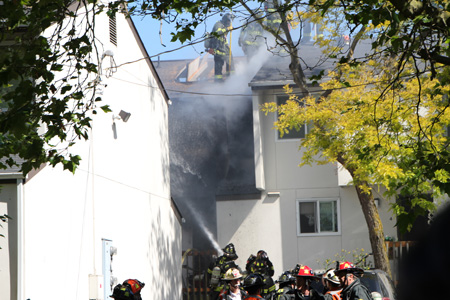 When we arrived on scene shortly after the fire department, a woman was screaming, “My babies, my babies!” as neighbors worked to restrain her from running back into the burning apartment. Confusion reigned as family and friends tried to find out if the children were safe. 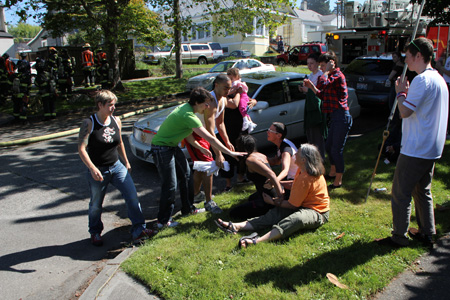 One of the missing kids was located by neighbors. She was brought into the arms of her distraught mother. Five others were lost in the fire: a 5-year-old girl, a 6-year-old boy, a 7-year-old girl, a 13-year-old boy and a 21-year-old woman. The man who was graduating today at the UW was among the residents who tried to beat back the flames with a garden hose. 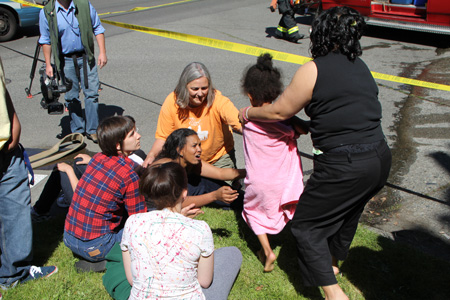 Some residents were angry, yelling to the gathering media that the fire department took too long to arrive, get organized and enter the apartment. “It took them 20 minutes to get here,” Lisa said. “We had to break windows out. We had the hose out. I’ll never be the same after today. Never. Never.” Another neighbor said the delay was after firefighters arrived. “It took a very long time to get water. There were bumping into each other,” said Cynthia. “All I could think of was, where’s the ladder to go up there?” 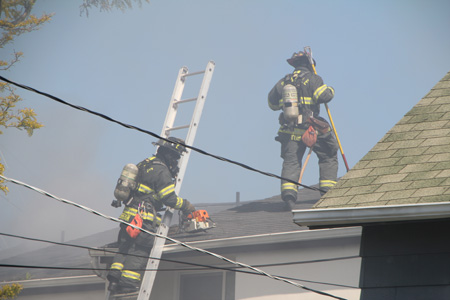 Fire Chief Gregory Dean said the first two units to arrive at the scene both experienced difficulties. The first arrived 5 minutes after the 911 call, but it had a mechanical problem with pumping water. Engine 18, a Ballard-based unit, was checked this morning but failed on the scene, Dean said. The second company, Engine 20, arrived two minutes later at 10:11 a.m. and was the first to put water on the fire. Engines 17 and 21 arrived one minute later at 10:12 a.m. and Engine 9 arrived at 10:13 a.m. Others followed soon thereafter. 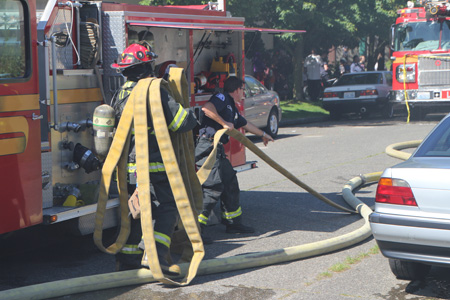 Dean confirmed a comment posted by a My Ballard reader earlier this morning: the second responding company, Engine 20, lost a hose while driving across the Fremont Bridge en route from North Queen to the fire. “One firefighter was injured,” Dan said. “They dropped some hose, he went to get it, and he injured himself in the process.” The engine stopped to quickly remove the hose from the roadway, and a firefighter injured his back. The engine had left the station at 10:06 and arrived at the fire at 10:11 a.m. 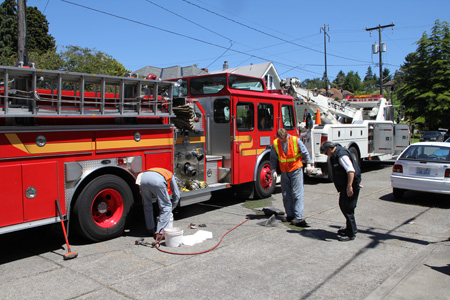 Photo of Engine 18 about to be towed away several hours after the fire.

“Every moment counts in a fire,” Chief Dean said. “Where this measures as far as it fits in, I don’t have an answer for you.” Dean said firefighters saw heavy dark smoke and flames coming from the unit when they arrived, “which is pretty hard to sustain life itself.” He said an investigation is already underway.

“Our heart goes out to all these people,” he said. “Our firefighters believe they can save everyone. They’re beating themselves up right now.” The investigation will also look at the building codes. One neighbor said there was a fire in the same unit two years ago, and we found an archive story on an apartment fire from March 14, 2008 that appears to be at the same complex. 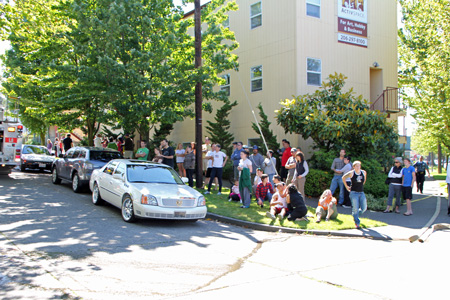 Three people were taken to Harborview Medical Center for treatment, including the distraught mother, a man who arrived after the fire began and a child. They were not injured. Seattle Mayor McGinn arrived on the scene just before noon, thanking firefighters for their efforts before departing to to Harborview to talk to the family. Investigators have yet to recover the bodies.

Here’s a video of the story from the Seattle Times:

And you can read the Seattle Times’ story on the fire here.

Note: There are a couple efforts just getting underway to raise money for the families, and we’ll let you know as soon as there’s information to provide.