We don’t see many bees flying around Washington at the end of November, but we do see the fruits of their labor. Pumpkin pie, cranberry sauce, green beans and more of the foods that make Thanksgiving dinner so special are possible through the work of bees. But bees are at risk. So this holiday season, chefs, restaurant owners and environmental advocates are speaking out to protect bees and help stop them from dying off at alarming rates.

Honeybees, bumblebees, and other bees are critical both to the environment and our food supply. Bees pollinate many of the world’s most common crops, including Thanksgiving favorites such as cranberries, green beans, carrots, brussel sprouts and pie fillings from pumpkin to apple. Bees pollinate coffee, chocolate and the alfalfa eaten by dairy cows.  Even honey and fruit-sweetened beverages, like Fremont Brewing’s Pink Boots Pale Ale with honey, need bees.

“Fremont Brewing is a member of the Bee Alliance because bees are a crucial part of our ecosystem and protecting the environment is one of our core values,” said Sara Nelson, Co-Founder/Owner of Fremont Brewing. “Bees pollinate many of the plants we use as ingredients in our specialty beers and infusions such as berries and lavender and, of course, they produced the 120 lbs of honey we used to make our Pink Boots Pale Ale last March. We are thankful for bees *Because Bees Matter* – not just for our beers but
for the planet!” 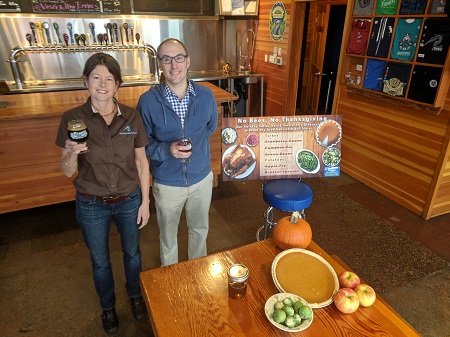 Unfortunately, millions of bees are dying across the U.S. every year. Beekeepers report they are losing an average of 30% of all honeybee colonies annually. Not only are honeybees in danger; native bees, including bumblebees, are also at risk. The U.S. Fish and Wildlife Service added the first bee in the continental U.S., the rusty patched bumblebee, to the endangered species list earlier this year.

Scientists point to several reasons why bees are dying off, including global warming, habitat loss, parasites and a class of bee-killing
pesticides known as neonicotinoids, or neonics. Sharing some of the same chemical properties as nicotine, neonics are
neurotoxins that can kill bees immediately and also can disorient bees, making it harder for them to pollinate plants and get back to their hives.Despite the fact that the science is clear on the dangers, neonic use has dramatically increased over the past decade. A recent study found that 86% of North American honey sampled contained neonics.

In February, Environment Washington joined with Environment America to launch the Bee Friendly Food Alliance, a national network of over 240 chefs, restaurant owners and other leaders in the food industry working to protect the bees. In Washington, 18
restaurants, chefs and local food industry leaders, are part of the Alliance, including Sara Nelson from Fremont Brewing Co.

“I’m looking forward to making my grandmother’s fresh cranberry sauce,” said Speight. “We need to take action now to protect the bees and ensure we can enjoy our favorite foods with friends and family for many Thanksgivings to come.”