In the 2nd of five shows recreating Allen Stone’s “Evolution of an Artist” in Seattle’s music scene, the Soul and R&B artist will perform at Nectar Lounge this evening. Doors open at 7:30 pm and the show begins at 8:30 pm. Manatee Commune will also perform. KUOW recently interviewed Grant Eadie, the local electronic artist known as Manatee Commune on Weekend Edition.

Greenlight Media and Marketing is producing the “Evolution of an Artist” digital content series:

The unique “Evolution of an Artist” series will recreate Allen’s rise as a live performer in Seattle’s music scene. Starting with one of the first venues Allen ever played back in 2008, the (300 capacity) Triple Door on April 13th, to headlining the majestic Paramount Theatre on April 18th (2,807 capacity). Other venues he will play during the week include Nectar Lounge (4/14), The Crocodile (4/16), and Neumos (4/17). All shows will feature up and coming local Seattle bands as support.

Allen recalls, “When I moved from Chewelah WA to Seattle WA I was terrified. I was a tiny fish in a gigantic pond, a pond with an extremely rich history of powerful music. However, what I found was a very supportive community of music lovers and players that put me on their back and helped make my dream a reality. I am most comfortable performing my songs in Seattle so revealing my new songs and recounting the evolution of my musical experience there is going to be mad fun!” 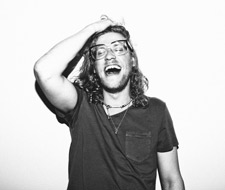 “The ‘Evolution of an Artist’ program is a reflection of an artist’s journey to success,” said Dominic Sandifer, president of GreenLight Media & Marketing. “Everyone, whether an artist or not, began their careers somewhere – and this series encourages the fans and artists to retrace their footsteps while moving on towards the next chapter. Allen is the perfect representation of the series.”