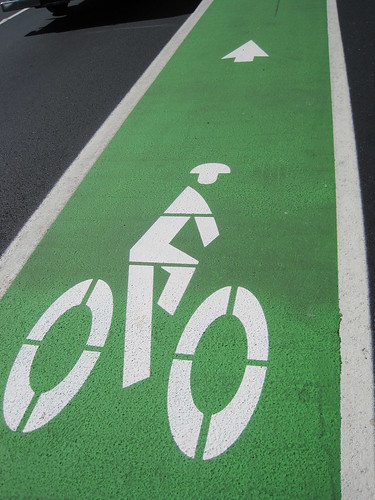 It’s the question posed by Seattle Bike Blog in the wake of yet another bicycle shop opening in town (Recycled Cycles) and news that high-end custom bike builders Cascade Bicycle Studio is stepping things up by holding open hours.

And that’s just the tip of the bicycle iceberg, as SBB explains:

This means in just one week, Fremont has emerged as the clear bike shop center of Seattle with five bike shops (Wright Bros, Free Range, CBS, Recycled and Speedy Reedy) in just a 15-block stretch, all within a few blocks of the Burke-Gilman Trail. Mad Fiber makes its world-famous high-end carbon wheels in the old Essential Baking factory, and the Google team that lead the Google Maps bike directions project is based in the company’s Fremont offices. And, of course, there’s Fremont’s iconic Solstice naked bike ride (maybe NSFW).

Meanwhile, Fremont Brewing has emerged as a favorite bicycle destination (it’s bike rack is nearly always full) and Fremont Coffee has had a big bicycling clientele for years. And let’s not forget Theo Chocolate’s awesome Bicycle Benefits. You can begin to see the power of the bicycle economy. When people feel safe biking somewhere, local businesses start making efforts to encourage biking, then more people bike, and on and on…

It’s a strong case, especially when you throw in the new bicycle lanes up and down Fremont Ave and 34th Street and the bike runnel on the 41st St. Bridge.