What if you could hop on a subway train here in Fremont and take it over the hill to Ballard or across the lake to University District? It might just be a possibility one day.

Ballard Spur, the proposed light rail line from Ballard to the University District by Ballardite Keith Kyle, has teamed up with Seattle Subway. 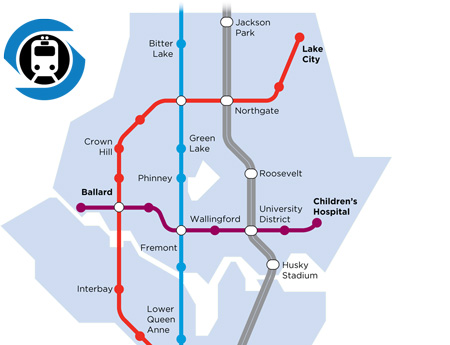 Seattle Subway is a campaign to speed up high capacity transit investment in the city. We’re working to create a vision that excites people, to bring us together in support of expanding our transit system with permanent, congestion free transit that gets us between neighborhoods not just as fast as cars can – but faster. We don’t want to wait until 2020 to go back to ballot – we want to connect the city now, and Seattle voters have shown a repeated willingness to do that!

Kyle says this is a move in the right direction to bring light rail to Ballard. “This is a pooling of resources and transit advocates behind a single vision of Seattle’s future,” Kyle tells us. “This gives us a long range vision that has something for voters across Seattle, not just north of the Ship Canal. We want people to look at the map and imagine how much it could improve their lives.”

According to the proposal, the 3-mile Ballard Spur would include stations in West Ballard, East Ballard, Fremont, Wallingford and University District.