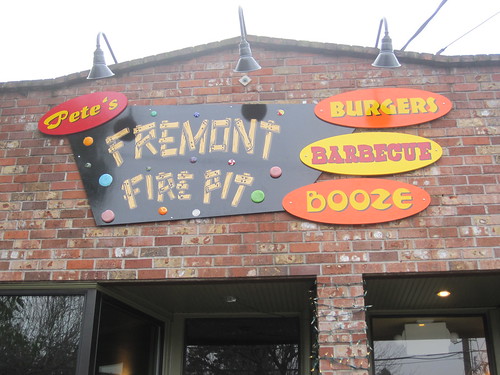 The curious case of Santolea, which had a sign in the window announcing it’s return “next week” for about six months, is over. The spot across the street from the 36th Street & Dayton Ave. will now became Pete’s Fremont Fire Pit, featuring “burgers, barbeque and booze.” It’s all right there on the sign.

The Pete in question is Peter Glick, otherwise known as the owner of nearby Roxy’s Diner and Backdoor @ Roxy’s.

Fremocentrist spoke with Glick, who outlined his all-ages restuarant theme:

With heavy influence brought by the Solstice Parade and Burning Man, Glick also wants to bring intrinsic Fremont funk into the establishment.  Having been one of the original operators of Smokin’ Pete’s BBQ on Northwest 65th Street in Ballard, Glick looks forward to once again offering up mouth-watering BBQ, and famished Fremonsters can look for an opening, hopefully, in November.

Crews seem hard at work inside so I expect to see this place open soon enough.