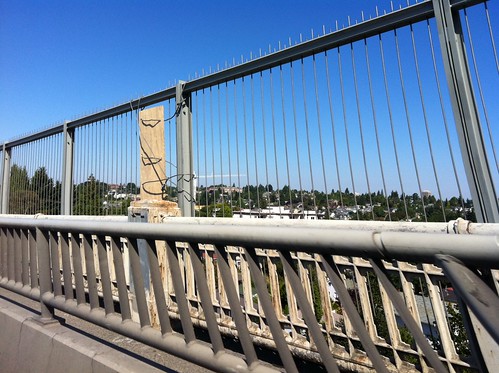 Sunday night, traffic came to a standstill when a woman threatened to jump off the Aurora Bridge. Thankfully, after the arrival of police and ambulances, she decided to come down.

According to Christopher Reaves, who live-tweeted the saga, police had to cut away part of the recently-upgraded fence along the bridge to get her.

“North end of the Aurora Bridge should be clearing soon. SFD says the person is on the sidewalk now and no longer in danger of falling”

“Yes they got a rope around her and got her safely to the sidewalk. They had to cut away part of the fence to do it.”

More details to come, I’m sure. Just glad to hear she is safe and they were able to convince her to come down.

According to Seattle Friends, over 230 people have committed suicide from the Aurora Bridge.