Fremont About To Revel In New Restaurant And Bar 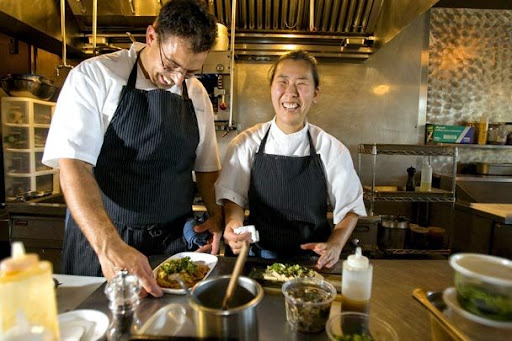 Back in October, we heard about plans for a new restaurant in Fremont from Rachel Yang and Seif Chirchi, the chefs behind Wallingford’s Joule. Those plans will come to fruition when their new restaurant, Revel, and the adjacent bar, Quion, open their doors to the public this Friday, December 17.

The new space is a partnership between the chefs, Chad Dale, Bryce Philips, and Ira Gerlich.

Revel and Quoin (an architectural term for cornerstone) are located at 403 N. 36th Street. Revel will focus on Asian street food like pancakes, dumplings, rice and noodles with the signature look and taste from Rachel and Seif. Look for dishes ranging in price from $8-$15.

Revel will serve lunch Monday through Friday and dinner seven days a week and, beginning in January, will serve Saturday and Sunday brunch. Quoin will be open daily from 4pm-12am with beer, assorted wines and spirits and house-infused Soju cocktails.

Both Revel and Quion feature outdoor seating in the rear. Revel can seat twenty people on their deck while Quoin fits fifteen along with the twenty folks that can be seated at their bar.

You may have already noticed the funky mural outside of Revel. That was designed by Pubs One, a local graffiti artist.

Read up on the chefs, who almost won Iron Chef America a few years back, in this article.