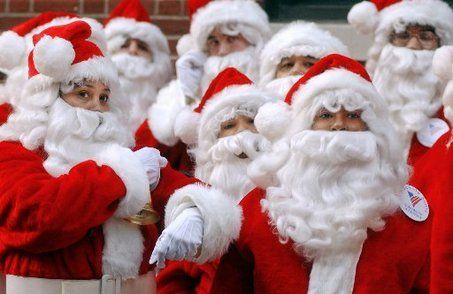 Last year, hundreds of Santa Clauses (Clausi?) roamed Capitol Hill taking part in SantaCon, the yearly tradition now sweeping the globe. In cities all over the world, Santas will gather in a specific location and form a kind of red-and-white mass that moves across the city, devouring food, booze and anything else in its wake.

Depending on where you fall on the Grinch spectrum, Seattle Santarchy either means a surreal experience watching a group of Santas invade bars and have a holly, jolly Christmas — or an irritating experience watching a bunch of douchebags make asses of themselves in holiday costumes. Or you have a Santa hat on, a warm red suit and are already so drunk that you don’t give an egg nog what people think.

Depending on where you fall on that spectrum, you’ll either be delighted or dismayed to know that Santacon kicks off this year at the Fremont Troll on Saturday, December 18th at noon.

At 12:30, the collection of Santas will depart for, well, we’re not quite sure. Just know that they’re most likely to head somewhere where alcohol is served. Last year, the Santas partied late into the evening and you can expect much of the same this year.

Also, the Santas must adhere to three rules that will (apparently?) be enforced:

* Every Santa is referred to as Santa, in the first, second, and third person, singular and plural.
* Have something ready to hand out, even if it’s just candy canes.
* NEVER wash the suit.

I suppose you have two choices on Saturday. Assimilate or stay the heck out of Santa’s way.