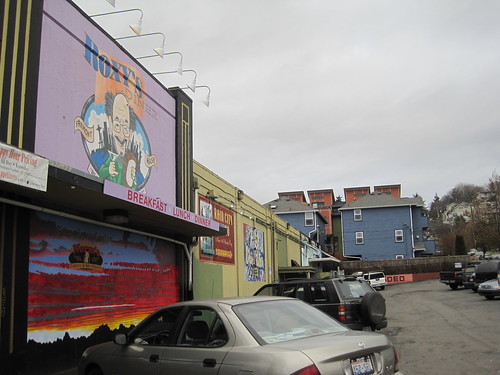 On the original Beverly Hills 90210, the kids loved to hang out at their favorite neighborhood diner, The Peach Pit. Eventually, as Dylan, Brenda and the gang grew up, so did their hang-out. It eventually added on a section that became the delightfully-named Peach Pit After Dark, a nighttime hangout where the kids mingled with celebrities (Duncan Sheik!) and Beverly Hills’ elite.

While not exactly the same idea, Roxy’s Diner is moving in the same direction. The space behind Fremont’s home for hot pastrami, formerly occupied by Rain City Video, is currently being fashioned into a dinner restaurant & bar. Roxy’s closes at 7 pm nightly while this new venture will provide fans of the deli with a late-night option.

Roxy’s owner Peter Glick says they are still working on the overall concept, name and menu for the new place, but adds that it will be “very theatrical, very fun and very Fremont.”

Glick hopes to have the restaurant/bar open in time for Valentine’s Day, but no later than March 2011.