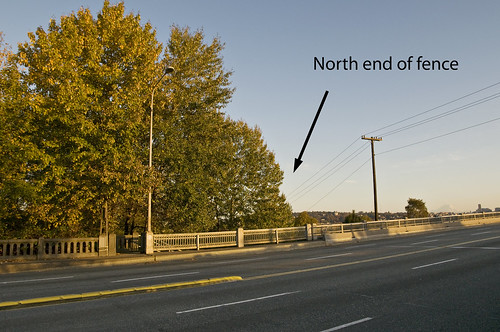 As you know, the Department of Transportation is working on installing fences on the Aurora Bridge to deter suicide attempts. Construction has been slow and the WSDOT has some updates for us on how the project is coming along:

Q. Why is the first fence post at N. 34th Street in Fremont? Is that where the fence begins?

A. No, the fence will begin just north of N. 36th Street right above the Fremont Troll.

Q. But the posts don’t begin until N. 36th Street. Are you sure the fence goes all the way to the Troll?

A. Yes, the posts all look the same, but they differ in how they connect to the bridge. Six different ways, in fact, and there are five different types of posts. These post-to-bridge connections depend in part on whether the post is attached to the steel middle section or the concrete sections at the north and south ends. It turns out that the fence manufacturer completed the posts that connect to the steel sections first and so the contractor is installing them first. The posts in the concrete sections on the west side of the bridge will go up in the next week or two.

Q. Why are there gaps between some of the posts?

A. The gaps indicate locations where we must complete repairs before installing posts. As you may remember, crews discovered corrosion in 23 beams about three months ago. We determined the beams would need to be strengthened before we attached the fence posts at those locations and added this work to the construction contract. We completed part of the repair and are waiting for a manufacturer to build and deliver the steel braces that will reinforce the beams.

Q. When will the fence be done?

A. We had hoped to have the fence done by the end of the year, but the added repair work has taken longer than we anticipated. It also appears that panel installation may take more time as well. These two factors will delay completion by about a month, into early 2011.

We’ll keep you posted on any more updates as they come in.