Movie shooting in Fremont on Friday

A feature film that shot at locations in Ballard last week will be doing some work in Fremont on Friday. 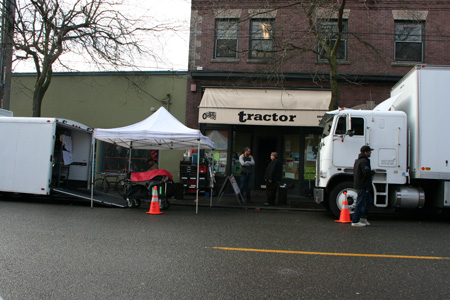 Neighbors and businesses were notified that “Late Autumn” (listed as “Full Autumn” on IMDb) will be shooting scenes in the area on Friday, January 22, from 10:00 a.m. to 3:00 p.m.  A location manager tells me film trucks will be at Gas Works Park and plans include filming a “Ride the Duck” boat travelling across the Fremont Bridge.

Variety says the film is a Korean remake of Lee Man-hee’s 1966 drama “Full Autumn” and stars Wei Tang (“Lust, Caution”) and Bin Hyeon.  It’s about a woman (Tang) who is released from prison to attend her mother’s funeral and along the way meets an escort (Hyeon) on the run from a jealous husband.  Filming is expected to wrap in early February with a target for release at the 2010 Cannes Film Festival in May. (Thanks to Terri for the tip!)