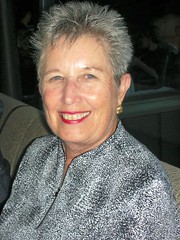 The Fremont Chamber of Commerce has awarded Virginia Swanson the Big Bertha Landes Award, which recognizes “women who take charge and take action”.

For more than 25 years Swanson has chaired the City of Seattle’s Special Events Committee which is made up of City department representatives, as well as citizens.  The committee’s job is to “review applications for large special events, set conditions to mitigate neighborhood and business impacts, and issue permits.”  Not a very small task when you consider they issue around 300 permits a year.

The Big Bertha Landes Award recognizes the help and support that Swanson has given over the years to special events in Fremont, which include the Red Bull Soap Box Derby, Fremont Fair and Solstice Parade, Trolloween and Fremont Oktoberfest.

“We, the small businesses of Fremont, realize our events make us a happening place,” said Suzie Burke, Board member of the Fremont Chamber of Commerce.  “Virginia has made Seattle a happening place for years.  We are so lucky to have her!”

In case you were wondering, Bertha Landes was the first female executive of a major American city as Mayor of Seattle from 1926-1928.  She followed through on a pledge to perform “municipal housekeeping” during a time tainted with government corruption and led a short but scandal-free administration.