Trolloween, the yearly event that celebrates the birth of the Fremont Troll, is expected to bring out hundreds of performers and people on Halloween night (that’s tomorrow!)  This is a photo of what last year’s celebration looked like.  (Thanks to Marcus for the picture.) 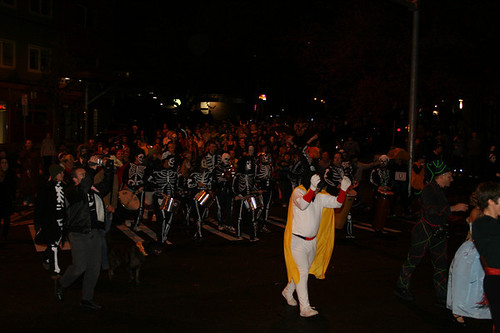 This year marks the Troll’s 20th birthday, and in celebration of the day, this year’s theme will be Dante’s Inferno.  Rain or not, everyone is invited to join in the merriment through Fremont that begins at the Troll at 7:00 p.m.  Following the procession, there will be an aerial dance performance of Daedalus by the Cabiri.  If it’s raining, the show will take place under the Fremont Bridge.  If not, they’ll be in the lot across from Theo Chocolate.

Seattle Police Department will be escorting this year’s parade, which starts under the Aurora Bridge at the Troll (N. 36th St. and Troll Ave N.)  From there, the route looks like this:

These streets will be closed on Saturday for Trolloween:

For more information, you can visit the Trolloween Facebook page here.