A Chilean flamingo chick hatched at the Woodland Park Zoo last Tuesday.  The little fluff ball is the first of its kind to hatch there in the history of the zoo. 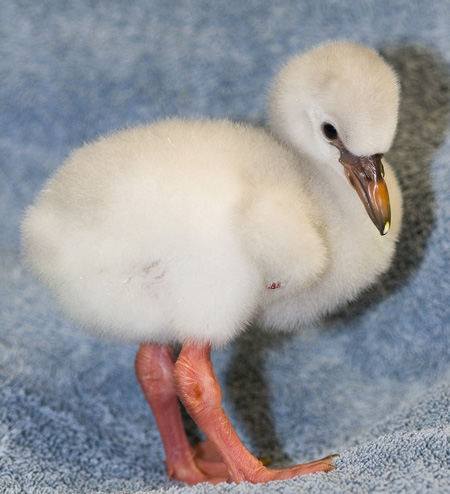 The first flock of Chilean flamingos arrived at the zoo in 1983 but were moved to make way for construction of the Rain Forest Food Pavilion.  A new flock of more than 25 flamingos were later donated to the zoo for an exhibit that opened in 2008.

This spring represented the first full breeding season for the new flock in the new exhibit as the graceful birds put on a striking show of synchronized courtship and ritualized behaviors for zoo guests – head flagging, wing saluting and marching in sequence and unison. This active display culminated with nest building, egg laying and one chick to date!

For the meantime, the chick is off public exhibit while expert staff hand-raise and hand-feed it to give the chick a higher chance of survival.  However, visitors can see the adult flamingos and nests in their exhibit near the Temperate Forest.

Three more eggs are currently being artificially incubated and are expected to hatch in the next few days.  (Photo: Ryan Hawk/Woodland Park Zoo)