Editor’s note: This is the first column written by lifetime Fremont resident Kirby Lindsay, who has written for the North Seattle Herald-Outlook and the Seattle Press. We’re happy to welcome her as a regular contributor.

On September 2nd, bids for construction of a safety barrier on the George Washington Memorial Bridge are scheduled to be opened, according to Washington Department of Transportation (WSDOT) spokesperson Greg Phipps. Phipps reported a contractor shall be announced in mid-September. Currently construction of the barrier on the bridge, more commonly known as Aurora, is scheduled to begin in January or February but Phipps admitted, “there is a chance it could be earlier.”

After two years of public meetings and consideration among representatives of the City of Seattle and the State of Washington, construction plan cleared final hurdles on June 3rd when WSDOT representatives presented their final plan to the City of Seattle Landmarks Preservation Board. Beth Chave, coordinator for the board, reported issuance of a certificate of approval for changes to the bridge, listed on the National Register of Historic Places, the Washington Heritage Register and a designated City landmark, on June 16, 2009. 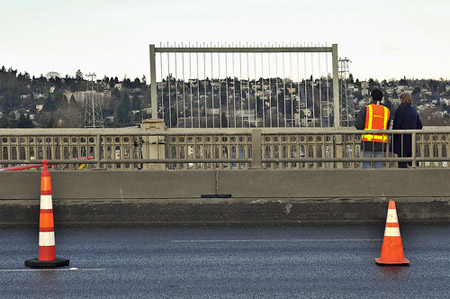 (Photo by WSDOT of a mock up panel installed as a test on March 29th.)

“The vote was close, but the board doesn’t always vote unanimously,” Chave explained, “It was a difficult decision for the board.” The decision came amidst much controversy. Public comment before the vote included three representatives from Queen Anne Community Council and Eric Pihl, a member of the Fremont Neighborhood Council, who spoke against this barrier plan. A couple residents who live within sight of the bridge and spoke in favor it.

According to Chave, her office sent copies of the certificate of approval “to an extensive list of people,” although this is not standard procedure. Citizens who had written to the Landmarks Board requesting information about this project were proactively sent copies. “On the second page it explains how to appeal,” Chave said. An appeal of the decision had to be filed with the Hearing Examiner within 14 days of issuance and, according to Chave, “no appeal was filed.” 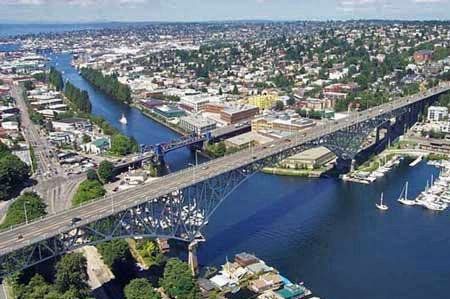 This leaves WSDOT free to move forward on a barrier, intended to deter people from attempting suicide by jumping from the bridge. It is also expected to provide safety, and less trauma, to those who live, work and move about beneath the towering structure. “We are proceeding with construction and we wouldn’t do that if there were an appeal,” Phipps asserted.

As to when construction will begin, it depends upon the contractor. “Contractors are looking at the plans,” Phipps explained, “we don’t know how many will bid.” WSDOT has specified night closures for work on the bridge deck, with traffic limited to one lane in a single direction at such times. Phipps admitted nighttime construction could create noise problems for those who live close, but will allow for normal traffic flow during high volume times.

The WSDOT web site says installation is scheduled for “early 2010,” but Phipps explained, “We will know more when we have a contractor on board.” The contractor, in conjunction with other local agencies, will ultimately decide the schedule for the work. Although, as Phipps asserted, “There will be information sent out” as WSDOT sets a construction calendar. 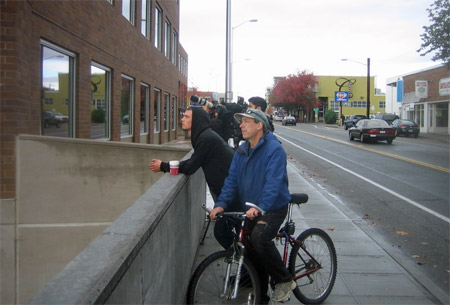 (Photo provided by Ryan Thurston of anxious witnesses to someone poised on the bridge, contemplating suicide in November, 2008.)

Efforts to build a barrier of some kind began in earnest in April of 2007 due in large part to Ryan Thurston, founder of Seattle F.R.I.E.N.D.S. (FRemont Individuals & Employees Nonprofit to Decrease Suicides) (www.seattlefriends.org.) Later this year, despite his triumph in his first foray into community activism, Thurston has chosen to leave Fremont to realize a personal goal, that of graduate school.