After 15 years of making beer as a hobby, Matt Lincecum has taken his passion to the professional level. The Fremont Brewing Company is officially open for business. “We delivered our first kegs last week,” Lincecum says with a proud smile. The former attorney says that it was tough making the jump from practicing law to making beer, but he says “it’s been a dream since i brewed my first keg.” And his wife has bought in on his dream, which isn’t always easy. “I don’t remember the exact wording of that first conversation,” he laughs. 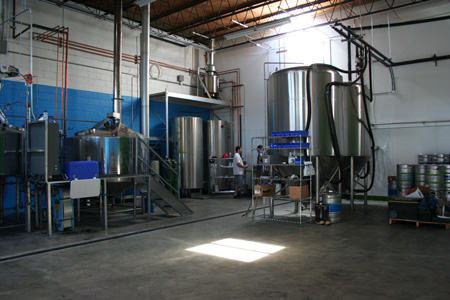 The small brewery strives to reduce their carbon footprint by using local ingredients, pre-owned equipment and sending their spent grains next door to Blue Marble Energy for them to use. Coincidentally the by-product of Blue Marble’s production is electricity, which is sent back to the brewery. 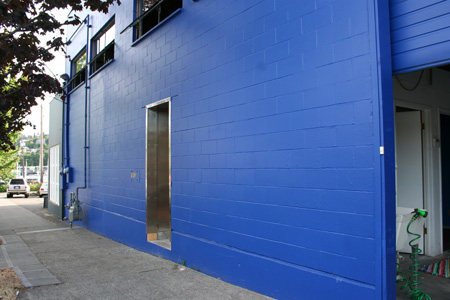 The outside of their building is currently bright blue, but the walls will soon be covered by local art. One side of the door will become an artist’s canvas which will be painted every few months, and the other side will have a bulletin board for neighborhood and brewery happenings. 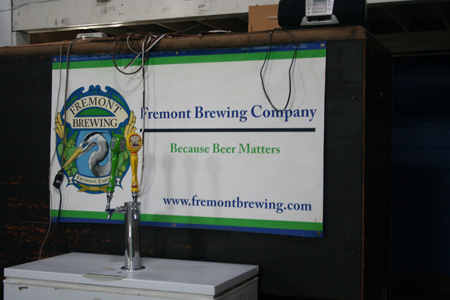 Once they’re fully up and running, they’ll brew two kinds of beers — the flagship Universale Pale Ale and the Interurban India Pale Ale. Right now it’s just the Universale, which is brewed 120 kegs at a time and served on tap at a dozen places around Seattle, including Fremont’s Pacific Inn Pub, Bottleworks, Sinners & Saints and The Fremont Dock… with more on the way.

The brewery, located at 3409 Woodland Park Ave. N., will have retail hours on Fridays from 4 p.m. to 6 p.m. where anyone can walk in and buy a growler ($15 for first fill-up), pint glasses (not filled) and t-shirts. (Check their blog for details on their retail opening date.) “We’re very excited,” Lincecum says, “We’ve done a lot of work to get the word out. It’s pretty overwhelming.”